RAM H. DARYANI
I am a civil Engineer, practicing as Consultant in the fields of Arbitration and Construction Management. I have been living on this planet Earth for 72 years. my hobby is translating SINDHI literature to English so that younger generation may come to know about Sindhi culture and literature. These blogs are dedicated to my mother Nanki and my father Hari, who are my Gurus.

Next day when the court of Raja Dasrath gathered; Rishi Vashisht continued telling Rama, about the qualities of Pursharth (Efforts).

RISHI VASHISHT: When a person puts in Pursharth to achieve the riches of this world, the mind encounters many worries and experiences grief. The mind fails to achieve stillness. However, you need not be disheartened O Ramji. You can free yourself from the cycle of birth and death by Pursharth done bravely and with determination. No god will come for your rescue. A person who has relied upon gods, he has lost everything, which includes Dharma (righteousness), Arth (money), Kama (pleasures of life) and Moksha. This person is lower than the lowest.
Whosoever has established himself in wisdom has done only with Pursharth. No one can achieve success without Pursharth. Even Guru Brihaspati had to put in lot of efforts to become Guru of god Indra, who is Raja of all gods. Shukracharya had to do Pursharth to become Guru of Asuras. The effort that serves some purpose, or to achieve a goal is called Pusharth.
O Ramji! When a person goes to visit far way Tirth Sthan (holy places), he has to keep travelling. If he sits down and becomes lazy, he will never be able to reach the Tirth Sthan. You can satisfy your hunger only when you eat food. Can you kill your hunger without eating? You can achieve your desired goal only by Purshartha. Nothing can be accomplished by sitting idle.
O Ramji! In this royal court of Raja Dasrath awe have lot many enlightened Gurus and Rishis. You can ask them; whether I am correct or not.
O Ramji! One has to constantly keep a watch over the demands of sense organs. One has to act according to the instructions enshrined in the scriptures. One should never do anything which is contrary to what is said in the scriptures.
O Ramji! Look at the persons who are very affluent and who possess remarkable amount of knowledge. They have achieved all this with their Pursharth. And those who gave up Pursharth have acquired the birth of lower forms of life like snakes, lizards, ants, and flies.
O Ramji! I advise you to act according to the sayings of enlightened souls and instructions of the scripture. By doing so, you can get rid of all the maladies of the world and life.
O Ramji! Lord Vishnu, in various incarnations has killed so many beings. But those actions do not get attached to Lord Vishnu as sins. The reason for this is that Lord Vishnu has reached the highest status though Pursharth. You can also get across the ocean of this world only through Pursharth. Hence there is no need to depend upon gods and waste precious time.

Rama asked a question.
RAMA: O all knowing Rishi! You say that there is no god. But, in this world it is believed that even a Brahmana (Priest) is also god. What ever happens happens with help of gods.

RISHI VASHISH: O Ramji! One has to suffer for the bad deeds done in the past. Karma is all powerful. No matter with what name you may call it, be it ‘god’ or ‘Purshartha’ it is one and same. Pursharth is the only god. The word ‘god’ has been coined by idiots, for idiots. Just as you do not see anything in the sky, similarly there is no god and is empty just like sky.

RAMA: O Rishi! You say that god is nothing, and is empty like sky. You agree that in the world the word god is popular. You also say that Pursharth is god. Therefore it implies that god is there.
RISHI VASHIST: O Ramji! I am telling you all this to permanently remove the notion and impression of god from your mind. Pursharth is your god. Vasana, which is the present consciousness formed from past Karmas, is in the mind. Whatever the mind of the man desires gets through Purshrtha. But at the same time one has to obtain the fruits of good or bad deeds done in the past, which may be happiness or sorrows. Therefore it is proved that Pursharth is not different from Karmas. Pursharth and Karmas (deeds done in past) are interrelated. Hence it is further proved that the cause for happiness and sorrows is Pursharth only. There is no god.
O Ramji! Please think over this matter.
RAMA: O great Rishi! When sorrows and happiness is controlled by Vasnas, or past Karmas; hence there is nothing that a man can do. A man does not have a will of his own. O Rishi! Please tell me some method to get rid of the effects of deeds of past. My past deeds have made me very weak.
RISHI VASHISHT: It is true that a person has to face the effects of his Vasanas and Karmas. But an intelligent person; with Pursharth can reverse and nullify the effects of past bad deeds. When you determine to be in the company of enlightened persons, when you study the scriptures and do your deeds as directed, your bad Vasnas will get dissolved.
O Ramji! Now understand, how to recognize the good and bad deeds of past. When your mind is constantly dragging you to the path contrary to the path as directed in the scriptures; when your mind entices you and drags to luxuries of life; then you should understand that your past deeds have been bad. But, when your mind urges you to be in the company of enlightened souls; when you develop aversion to the luxuries of life; then you should comprehend that your past deeds have been good.
O Ramji! From what you told Rishi Vishwamitra, it is clear that your past deeds have been good. For this reason you will be able to grasp the Shastras very quickly. You are alive. You are not an inanimate object.
O Ramji! I bless you to master the Brahma Vidya (knowledge of Brahma) with your Pursharth. 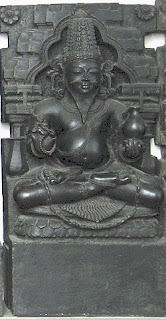 BRIHASPATI STATUE
NOTE ON BRIHASPATI:
Bṛhaspati is the son of Rishi Angirasa (according to the Rig Veda 4.40.1) and Surupa according to the Shiva Purana. He has two brothers named Utathya and Samvartana. He has three wives. His first wife Shuba gave birth to Bhanumati, Raaka, Archishmati, Mahamati, Mahishmati, Sinivali, and Havishmati, his seven daughters. His second wife Tara gives birth to seven sons and a daughter. Through his third wife Mamata, he has two sons, Kacha and Bharadwaja.
He attained his position as the Guru of the Devas, by performing penances on the banks of Prabhas Tirtha. Lord Shiva granted him this position, as well as his position as one of the Navagrahas (Nine Planets). Planet Brihaspati is Planet Jupiter. Thursday in India is known as Brihaspat.
NOTE ON PRABHAS TIRTHA:
Prabhas Patan, known popularly as Somnath Patan, is situated in Gujarat (Saurashtra), 7 km. from Veraval. This is a place of pilgrimage, or Tirtha, of the most popular Jyotirlinga of Lord Shiva, i.e., Somanath
According to tradition, here, Krishna is supposed to have left His mortal body at the end of Krishna avatar (Avatars), enacting the drama of being killed by a hunter who mistook Krishna for a deer and shot him

PICTURE OF SHUKRA - VENUS
NOTE ON SHUKRACHARYA:
Shkracharya was a descendant of sage Kavi. The Devi-Bhagavata Purana refers to his mother as Kavyamata. The feminic natured Shukra is a Brahminical planet Venus. He was born on Friday hence, Friday is known as Shukravaar (Day of Shukra) in India. He went on to study the Vedas under the rishi Angirasa but he was disturbed by Angirasa's favoritism for his son Brihaspati. He then went to study under rishi Gautama. He later performed penance to Lord Shiva and obtained the Sanjivani mantra (a formula that revived the dead). He married Priyavrata's daughter Urjaswathi and they had four sons — Chanda, Amarka, Tvastr, Dharaatra and a daughter by name Devayani.
During this period Brihaspati became the Guru of the Devas. Due to the hatred he bore towards Vishnu for what he perceived as the murder of his mother as she had given shelter to some Asura whom Vishnu was hunting, Shukracharya decided to become the Guru of Asuras. He helped them achieve victory over the Devas and used his knowledge to revive the dead and wounded among them.
The fact is that the Devas and Asuras were among two sections of Aryan kings and rishis out of which one section was worshiping deities called the Devas and the other, deities called the Asuras. These Deva-Asura differences were aggravated to such an extent that at a later period, his descendants and followers had to leave Sapta Sindhu(presnt day indus valley comprising os Sindh and Punjab) and settle elsewhere, probably in Iran. The priests of the Ahura-worshiping sect of Ahura Mazda of Iran are called Atharvans. Shukracharya was a strict worshiper of Agni. One can see that the followers of Ahura Mazda, present day Parsis in India, still worship Agni or Fire.
Devayani was the daughter of Shukracharya, who was rejected by the son of Brihaspati, Kacha. She later marries Yayati who founds the Kuru dynasty. In the time of the Mahabharata, Shukracharya is mentioned as one of the mentors of Bhishma, having taught him political science in his youth.

END OF CHAPTER 5 of PART II