RAM H. DARYANI
I am a civil Engineer, practicing as Consultant in the fields of Arbitration and Construction Management. I have been living on this planet Earth for 72 years. my hobby is translating SINDHI literature to English so that younger generation may come to know about Sindhi culture and literature. These blogs are dedicated to my mother Nanki and my father Hari, who are my Gurus.

NOTE ON KAMADEV:
Kamadeva is the handsome love god. His attributes are a bow of sugarcane strung with a line of hummingbirds from which he shoots arrows of desire. Kamadeva rides a parrot. He is the son of Lakshmi and Vishnu or Brahma. Kamadeva can be equated to the Roman love god Cupid or Greek god Eros.
In Puranas, Kamadeva is shown as rising from the mind of the creator Brahma. At some places he is son of Sri; another name of Laxmi, consort of Vishnu. Kamadeva's consort is Rati, whose very essence is desire, carries a discus and a lotus, her arms are compared with lotus-stalks.
There is a myth about Kamadeva’s incineration, described in Matsya Purana and Shaiva Purana. Indra and the gods are suffering at the hands of the demon Tarakasur, who cannot be defeated except by Shiva's son. Brahma who advises that Parvati woo Shiva; their offspring will be able to defeat Taraka. Indra assigns Kamadeva to break Shiva's meditation. To create a congenial atmosphere, Kamadeva (Madana another name of Kamadeva which means ‘intoxicating’) creates an untimely spring. He evades Shiva's guard, Nandin, by taking the form of the fragrant southern breeze, and enters Shiva's abode. After he awakens Shiva with a flower arrow, Shiva, furious, opens his third eye, which incinerates Madana instantaneously and he is turned into ash. However Shiva observes Parvati and asks her how he can help her. She enjoins him to resuscitate Madana, and Shiva agrees to let Madana live but in a disembodied form, hence Kamadeva is also called 'Ananga'(Bodiless). The spirit of love embodied by Kama is now disseminated across the cosmos: it affects Shiva, whose union with Parvati is consummated. Their son Kartikeya goes on to defeat Taraka. 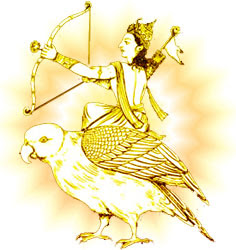 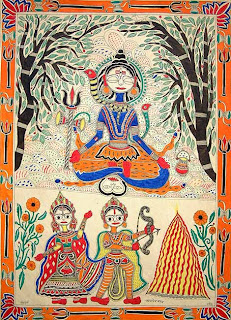 Kamdev Reduced to ashes by Shiva


(Above images are downloaded from Wikipedia)

O Muneshwar! All the bad habits creep in during youth just as ants creep in the sweets. A person, who indulges in satisfaction of his flesh as happiness, is in fact a fool. Just as thieves, under the cover of dark night enter the house to steal; in the same way thieves like Kama (lust), Krodha (anger), Lobha (greed), Moha (attachments) and Ahankara (ego) enter the person during youth, which is like a dark night. These thieves take away Atma-Gyan (Knowledge of Self or of Atma the Soul). Thus a person is made to suffer.
O Muneashwar for these reasons I am not interested in enjoying the age of youth.

O Muneshwar! The youth is a great enemy of a person. Those who are who are not singed by Kama and Krodha are blessed. The person, who is away from these maladies, is a very strong and intelligent person. But the person who gets entangled into claws of Kama and Krodha is no better than an animal.

The senses get enticed by the pleasures of the body and flesh. The mind gets inauspicious thoughts. These inauspicious thoughts make the pleasures colorful. A youth is always enamored and captivated by the charms of a woman. But on seeing her in the right perspective it will be seen that the body of the woman is nothing but flesh, bones, blood and excreta. It is a like a kathputli (Puppet), whose strings are controlled by her own Atma (Soul). It is only because the man does not see a woman with the real eyes; she looks enchanting and delightful to him.

Just as the poison ivy looks beautiful, but on touching it gives a nasty rash, in the same way touch of a woman will destroy the man. This can be compared to an elephant tied in chains. In the same way an ignorant man is focused on woman with the chains of passion, and cannot think of anything else. When the elephant tied in chains is hit with hook by the mahout; it breaks the chains and goes in the direction pointed by the mahout. In the present case the elephant in chains is the ignorant man tied with chains of passion and the mahout with the hook is the Guru.

O Muneshwar! A man who is obsessed with the charms of a woman, invites self destruction. The moment the woman gets separated from him even for a short while, he starts burning in fires of desire. Therefore; O Muneshwar I am aware that woman is the root cause of all the sorrows.

O Munshwar! One who has given up company of woman; has given up this world. It is because a woman is seed of this universe.

TO BE CONTINUED
Posted by RAM H. DARYANI at Thursday, June 09, 2011 No comments: Links to this post